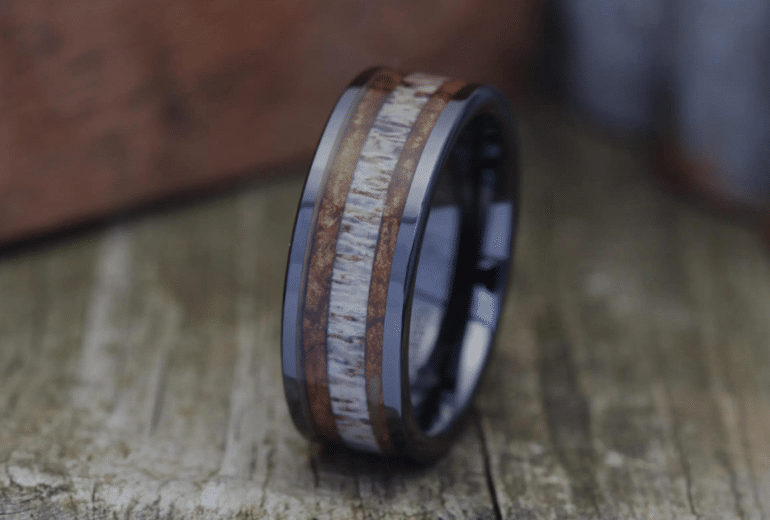 If you’re searching for a beautiful black tungsten carbide wedding band, we invite you to check out The Elkwood.

This unique ring is ideal for the outdoorsman in your life who wants to stand out from the crowd. Made from rugged metal, wood, and deer antler, it’s sure to turn more than a few heads while perfectly capturing the spirit of the guy wearing it.

Here’s how we bring it to life:

Step one: The Tungsten.

We start with a metal band made from black tungsten. Tungsten carbide is one of the toughest materials on earth. It’s made from combining carbon and pure tungsten—an incredibly dense metal with a ridiculously high melting point. (Try 6,192 degrees Fahrenheit! That’s 5 times hotter than a volcano!)

Then we make it black by coating it with particles of black coated titanium that gets embedded into the tungsten. The band that you get as a result has a rich black color with centuries of deep meaning.

Black rings have existed since the days when ancient Greeks fashioned rings from black onyx. While they can have whatever meaning the wearer wants to assign to them–it’s your ring, after all–traditionally, they symbolize courage and strength. Many couples choose them as a way of expressing their unique style.

This is where this ring starts to get interesting!

We leave a channel around the center of the metal band. Then we carve two narrow wooden inlays to fit it perfectly, leaving still another space in the center of that for the antler piece. (More on that in a minute.)

Whiskey Barrel. A popular type of wood our customers typically choose for The Elkwood comes from retired whiskey barrels. So if your guy is a fan of ordering up “wee drams of Scotch” or “neat pours of bourbon,” a whiskey or bourbon barrel ring embedded in black tungsten carbide could be the perfect extra touch.

Koa Wood. If he prefers a beautiful wood inlay that is rare and steeped in meaning, a koa wood wedding band inlay may be what you’re looking for. Koa is only found in Hawaii and is a huge part of their heritage.

During the 1700s, under the reign of King Kamehameha, Koa was the preferred wood used for making the canoes, spears, shields, and other weapons of his warriors. It became the nickname of the very warriors themselves. Koa was soon synonymous with bravery and strength, which is a reason why Hawaiian koa wood rings have grown so popular.

Koa is an extremely protected resource in Hawaii today. It can only be grown on certain private reserves, and taking Koa wood from public lands is illegal. It takes 50 years for a Koa tree to be ready for harvesting, so if you choose a koa wood men’s wedding band inlay, you know you’ll receive a special piece of wood from a special place.

The final piece that makes The Elkwood such an incredible statement of a men’s wedding band is the band of honest-to-goodness antler around the center. There are many different ways to fashion antler rings, but set against black tungsten, this unique element really shines.

The antlers we work with are gathered from the forest where deer naturally shed them every year. We then cut sections to match the thickness of the band we’re creating. Once the antler inlay is fitted into the groove between the two wood inlays and polished smooth, the distinctive patterns really stand out. A Men’s Black and Wood Wedding Band Like No Other

The natural markings of the wood inlays together with the patterns of the antler piece make it so that no two rings are ever alike. Even if we used inlays from the same source materials to make two Elkwood rings in a row, they would turn out completely different.

We also need to mention that you won’t sacrifice a single bit of comfort while sporting this ring either. The inside of each band is designed with a smooth curve that makes it easy to look good and feel good at the same time. This is a ring that you’ll want to keep on your finger all day every day.

Every one of our rings comes with:

Sizing note: Because Tungsten is so tough, it cannot be resized once your band is made. But we’ve got you covered there too! Your local jeweler can give you precise measurements for your finger, or we can send you a ring sizer for only $10. Feel free to get in touch with us if you have any questions!

If you’re ready for a ring that will set you apart and last you a lifetime, shop now or browse other collections!

Take Me To The Elkwood!

Back to Posts
HAPPY NEW YEAR SALE!! 30% OFF SELECT RINGS