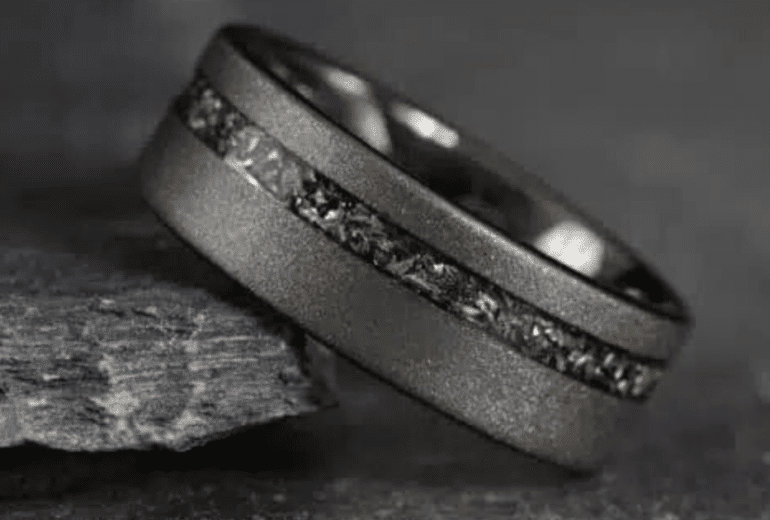 IKEA has brought quite a bit of Sweden into our homes. It’s a cool store, and their engineers have come up with a lot of interesting ways to pack modern furniture into tiny boxes.

Plus, the product names are entertaining to say. (Fun fact: they’re all named after Swedish towns, villages, and employees.)

But we’ve managed to bring you something even more amazing using ingredients from the Swedes—a ring that is (wait for it) literally out of this world. Meet “The Swagger,” a tungsten wedding band that includes an authentic piece of meteorite!

This 8mm black tungsten band has a blasted finish that creates a great matte surface. Then we take it even further by incorporating an inlay made from a real meteorite. It’s a ring that looks incredible and is certain to get compliments wherever you go! And with our comfort fit curve on the inside, it will feel great on your finger.

Here’s how we make it happen:

Tungsten and Meteorite Ring: A Match Made in the Heavens

A while back, we did a post on Tungsten rings (“Tungsten vs Titanium: What’s the Difference and Which is Best For You”) where we made the case for why it is such an amazing metal to choose for your wedding band.

Tungsten is one of the hardest things on earth and is virtually indestructible. It is nearly impossible to melt, scratch, or corrode.

Tungsten’s connection to Sweden is that it comes from the Swedish word “volfram” which means heavy stone. This is a pretty appropriate description since this is definitely a ring you’ll be aware of when it’s on your finger, but not so much that it’s uncomfortable.

For “The Swagger,” we start with Tungsten because we think it’s the perfect earth-bound material to pair with something that hurtled millions of miles through outer space before surviving a crash landing into our planet.

You can’t get much tougher than that.

Other ring makers may choose to use imitation meteorites, but ours is the real deal. (Pro tip: if you’re not sure, use a magnet. Authentic meteors are magnetic. If your ring doesn’t attract a magnet, you’ll know it’s a fake!)

Swedish connection #2: The meteor chunk we work with is from the Muonionalusta meteorite (say that 5 times fast!) that crashed into what is now the country of Sweden a long long long time ago.

The story is that the first piece was found in 1906 by two boys who were kicking stones while herding cattle. When they encountered a stone that was particularly heavy and kind of rusty, they took it back to their village where it was later identified as something extraterrestrial.

It was later named for the river that runs near the village where it was found. Since then about 40 fragments of it have been discovered there, and more were found above the arctic circle.

It is believed to be part of the iron core of a planet. Only 5% of meteorites that have been discovered are iron-based, so that makes Muonionalusta extremely rare.

While we definitely think Tungsten and meteorite wedding bands are a perfect combination (just like you and your one true love), there are other metals that pair nicely with meteorite too. We gladly make custom bands for our clients, so here are some options to consider:

Engagement rings and wedding rings are pieces of jewelry that are meant to be a part of you for a lifetime. Don’t settle for something bland that doesn’t really reflect who you are.

“The Swagger” isn’t a ring that can be worn by just anyone. Its place is on the finger of a man who is strong, dependable, and willing to see love through a lifetime and beyond.

Shop now, and let’s get a great ring started for you!

Back to Posts
Spring SALE!! 30% OFF SELECT RINGS