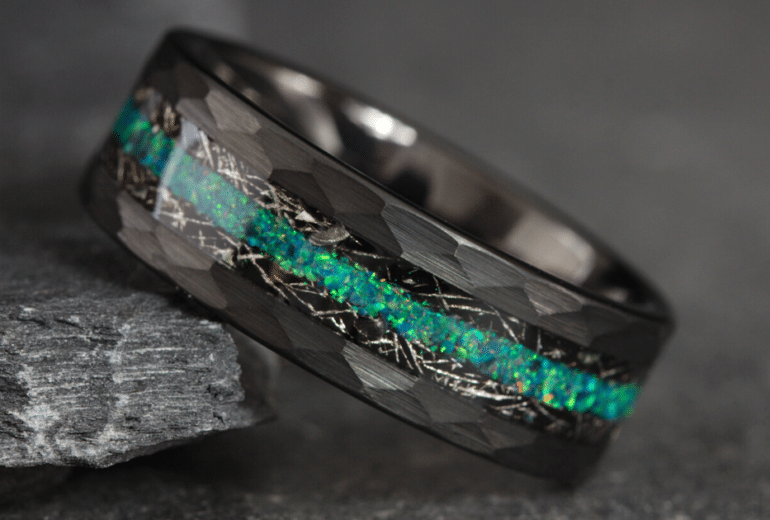 Opal is one of those gemstones that just immediately stands out.  When a guy wears a men’s opal wedding band, he’s sure to get plenty of attention.

(Fortunately, the band on his finger will scream “this one’s taken!” So people can just admire the ring and move along.)

Keep on reading to discover this incredible mineral that could be the perfect addition to your next ring!

Why Opals Are A Big Deal

Opal has a rich history of…well…being rich. Long ago it was highly valued because it was so rare, and it quickly became a symbol of royalty.

Napoleon gave his sweetheart, Empress Josephine, the famous 700 carat “Burning of Troy” opal; Queen Elizabeth II has been known to have several in her collection, many of which were passed down from Queen Victoria and others.

Ancient people groups believed that opals had supernatural powers (even the ability to heal diseases) and contained lightning that fell from the sky.

It’s not hard to imagine how they could come to that conclusion—about the lightning, that is. (There’s no medicinal value that we know of). Just stare into a good opal for a few seconds and you’ll understand why it has been called “the gemstone with fire inside.”

Opals come in a variety of colors, and there are two basic types: precious and common. Their value is largely determined by the darkness of the background they’re on and how much the colors inside them “play” when light hits them.

“Precious” opals are what we work with and what you’ll find in the inlays of most jewelry. The kind that is really impressive (and most valuable) is black opal where the colors are contrasted naturally against a black background. Napoleon was smart to choose that for his wife.

A more affordable, but no less beautiful, opal is white opal that has a light gray or white background. For the rings we create, we like to use blue opal because of how it stands out against whatever metal or wood we pair it with.

Opal is October’s birthstone, and it traditionally represents faithfulness and confidence—two qualities you’re sure to highly prize in your man, so it’s only fitting that his ring reflect it too!

We have designed a couple of styles of opal rings using both metal and wood. Check them out!

To see our selection of opal rings side-by-side, search “opal” on our site. If you’ve got an idea for a custom ring with an opal inlay, let us know! We’re always happy to make a one-of-a-kind ring just for you!

We handcraft all of our rings right here in the USA. They come with a lifetime warranty, feature a 24/7 comfort fit guarantee, and ship for free domestically.

Check out our opal selection and let us know how we can help you find the one for you!

Back to Posts
Spring SALE!! 30% OFF SELECT RINGS