If you’re looking for a hammered tungsten ring that will level up your style, we may have just the one for you! We call it “The Buck.”

The Buck is the kind of ring that makes someone stop you mid-sentence to say, “Whoa! Is that an antler on your finger?!” To which you can proudly say, “Why, yes. Yes, it is.”

We’re about to tell you all about it, but if you want to check it out now, here’s a link to The Buck – Silver Hammered Tungsten With Antler Inlay in our store.

To really impress people with your knowledge of antler wedding bands, you can tell them some of these interesting details that make The Buck one of the coolest rings around. 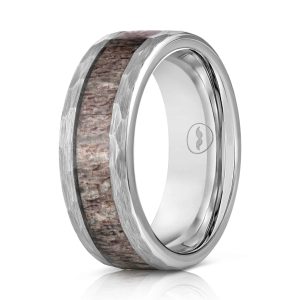 The Buck isn’t made of ordinary metals. That’s because we didn’t make it for ordinary guys. It’s made of one of the toughest, most durable elements around.

Tungsten (also known as “wolfram”) is a rare metal that is usually found hanging out with other elements. It’s a heavy metal, similar in weight to platinum.  It has the highest boiling point of all the elements. And its density is right up there with uranium.

It also has the highest melting point of any other element except for carbon. In fact, because of this, it is often used to make the pointed tips of ballistic missiles! (Take that, other rings!)

While raw tungsten is pretty brittle, when it is purified and formed into metal it becomes very moldable and its hardness is even stronger than steel. Yet it is comfortable enough to keep on your finger 24/7.

These days, it’s ok to get hammered. (We’re talking about the ring here.)

A hammered finish on a ring is the look you get when a jeweler literally shapes the finish on a ring with a hammer. It gives off a rugged vibe reminiscent of the old days when all metals were pounded into shape using a hammer, a blazing forge, an anvil, and sheer strength.

This style has become increasingly popular on men’s wedding bands because of the rough and irregular look it delivers while still being incredibly comfortable to wear. If you like the idea of breaking away from an ordinary smooth finish, check out how good a hammered finish looks on The Buck.

We realize that not everyone gets excited about wearing part of a deer antler on their finger. (That’s why we have lots of rings to choose from in our store…something for everyone.)

However, we have found that guys who love the outdoors and enjoy hunting reeeeally like making their favorite pastime a part of their ring with an antler inlay. It’s a way that they can stay connected to the outdoors when they can’t be in the woods. It’s also a way to share a little bit of that part of themselves wherever they go.

Deer shed their antlers every year, so gathering them and using them for things like this does no harm whatsoever. It’s a unique and interesting way to recycle something that usually gets left to decay on the forest floor.

The process of adding an antler inlay to a tungsten wedding ring is pretty fascinating, and they’re a lot of fun to make. Because every antler is unique and there are so many interesting markings on them, no two rings turn out the same.

We start with a hammered tungsten wedding band that has a channel in the center where the antler inlay will go. Next, we saw off a section of antler to create a disc that is slightly wider than the channel. Then, we use a lathe to bore a hole in the middle of that disc only a couple of millimeters bigger than the channel on the ring. (It takes a lot of precision here to get a perfect fit!)

After that, it’s just a matter of carefully breaking the inlay in half, fitting it into the channel on the wedding band, and setting it in place with a special bonding agent that makes superglue look super weak.

Why Choose “The Buck”

You won’t find this beautiful ring at your local jewelry store. This deer antler inlay with beveled edges on the silver tungsten wedding band has a modern, yet timeless look that is sure to get LOTS of compliments. It is a very eye-catching design that is even more vibrant in person and looks great on the hand. It’s a truly unique, exclusive wedding band that is great for that outdoorsman. Also, with our comfort fit inner shape this not only looks great but it also feels great on the finger.

Every one of our rings comes with a lifetime warranty. They’re built to wear every day, and this one especially can take whatever you throw its way.

Check out The Buck – Silver Hammered Tungsten With Antler Inlay today or browse our ring collections. We can’t wait to see how good this looks on you!